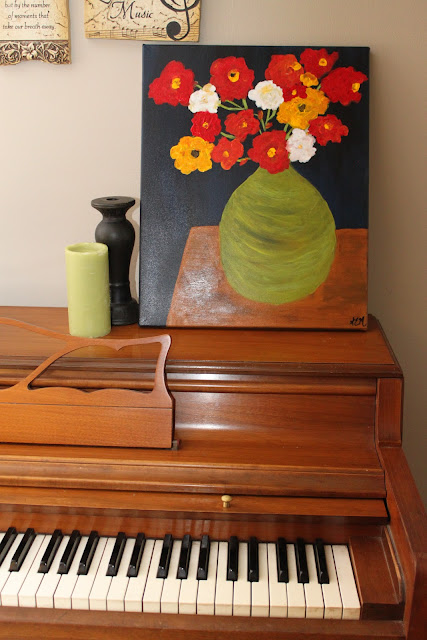 I'm so honored to be the owner of this new painting called "Flowers for Daryl". It was painted by Kay E. Martin and donated to a silent auction for a very special event I went to Thursday night. We actually won four items in the silent auction! It was a magical night called the "Farley Follies".

The Farley Follies are held to honor Daryl E. Farley, a 21year teacher of the Guilderland School District in New York State. She passed away October 31st, 2009 at the age of 49 from cancer.  She played school with her sister as a child and always knew she wanted to be a teacher. She loved her students and they were so sad when she passed.  As a way to remember her- the teachers decided several months later to celebrate her life with the kids by putting on an evening assembly, where the teachers took the stage and performed.

Tickets for the first year event sold out within the week! I remember my kids being devastated they couldn't go. So many kids were devastated that they ended up performing the show all over again the next day in an assembly at school, so everyone could be involved.

This year, when the tickets went on sale, we bought them the very first day! Good thing! Tickets sold out the FIRST DAY this year. As the curtain opened that night, I could feel the hearts in the room open. The teachers pulled out their old band instruments and performed a song!  It was so cute to see the school social worker, who our family loves so dearly, playing her flute! Another played a recorder and yet another a trombone!

Then, it was time to RAP! Yep! Teachers dressed in baggy M.C. Hammer pants-- rapping about how students "CAN read this!" Playing off his classic song, "You Can't Touch This".


Who knew so many teachers could TAP dance!?! Really- you just see these people as teachers, but they are so much more.

This school district is facing unprecedented budget cuts. No political sides taken here- just the cold hard facts. New York State is billions of dollars in the hole and sadly children are going to suffer as the governor looks for solutions.  Yet, these educators set aside the fact that some of them may not have jobs next year to raise money for the charity they started in honor of their friend. The kids will be able to play "wall ball" on a blacktop surface, instead of a muddy or dusty dirt pit.  A graduating High School Senior who wants to become a teacher will receive a scholarship. These acts of everlasting kindness are all because these educators truly love the kids. 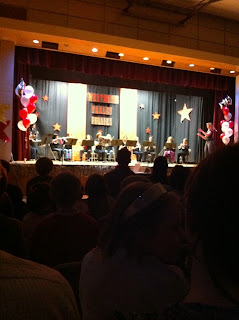 It was so rewarding to see them smiling and their camaraderie is evident. It made me cry. I learned our school is not a building, but a community. All the children truly love going there. It is filled with many people who went into the field of education to make a difference in a child's life.  I'm sure they will. I will always look at my "Flowers For Daryl" and think about a teacher I never really knew.  I'm so proud to be part of the community that she helped build. This will make me smile.

To donate to the Daryl E Farley Charity:

Hearing from you makes us so happy! Please leave us a kind word.

lover of all things crafty!